Towards new European synergies in the fight against bullying 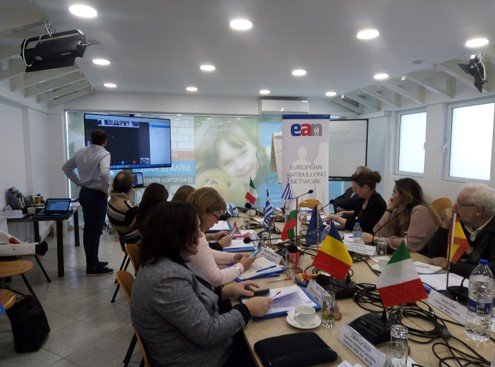 The annual meeting of the European Antibullying Network (EAN – European Antibullying Network) took place in Athens at the headquarters of the Greek association “The Smile of the Child”, on 29 November 2019, with the participation of representatives from 20 associations in EAN since 2014. In recent years, the EAN network expanded its collaborations by involving several Italian associations and new institutional partners including “the Observatory for violence in schools” (Ministry of Education of Cyprus), in order to guarantee new synergies in the prevention and fight against bullying and cyberbullying. The partnership has also expressed its interest to broaden its range of action, involving other members, including EUROCERT, a European certification body with which it will work to create an official certification for anti-bullying and the SANOFI pharmaceutical company to raise awareness public opinion and prevent bullying against adolescents suffering atopic dermatitis.

New elections to renew the EAN Governing Council will follow in June 2020.

During the meeting in Athens, CESIE presented the ongoing projects on: bullying, hate speech and fight against discrimination, including gender discrimination. Among the projects presented: REFLECT EXPERIMENT CAPTURE (REC), SENSE: Vocation and Sexual Sensitivity- Sexual Diversity in Social Domain Vocational Training, SAFER – Systematic Approaches for Equality of gender, EUROPE – Ensuring Unity and Respect as Outcomes for the People of Europe, INTEGRA – Multidisciplinary Mentorship program to support the entrepreneurship of children in care and young care-leavers [REC].

The EAN partnership shows a constant attention to the topic of bullying, offering a lot resources and teaching materials, also developed within the ABC: Anti-Bullying Certification project, of which CESIE is full partner.

The project holds together 7 organisations: