Since prehistoric times people have turned to drugs to lessen physical pain or alter their state of consciousness. Drug use was generally limited to people who had reached maturity or very particular situations. Currently, drug use and abuse is a very serious social and public health problem that generates great social concern. This is due to the widespread drug consumption in many sectors of the population, the decline in the age of usage initiation and the severity of the individual and community consequences of the phenomenon on the three levels considered in the current concept of health: physical, psychological and social. If a few years ago, speaking of the drug problem usually alluded to illegal drugs such as heroin, currently the concern has focused on the consumption of legal drugs such as alcohol and tobacco, which are considered the gateway to the consumption of other substances. Alcohol and tobacco are also considered the gateway to the use of substances whose consumption is increasing, cannabis and cocaine.

The phenomenon of drug use among young people is a growing problem which needs to be addressed in an international and multidisciplinary way. According to the epidemiological studies, the number of youngsters who admit having tried drugs continues to grow, while the starting age is decreasing (European Monitoring Center for Drugs and Drug-Addiction Annual Report 2007).

Thanks to the e-NEEDD study (European Network on Exchange Early Detection Drug-consumption) we reviewed aspects such as the definition of drugs and addictive behavior, consumption patterns and the current status of the problem. Also presented are the criteria used to determine whether consumption or abuse of a substance is taking place. Finally, we reviewed the main individual risk factors that favor substance consumption and integrate them into a comprehensive instrument to diagnose the presence of drug use risk factors and by the design and implementation of a training course for high-school teachers in the European Union in full compliance with priorities regarding drug dependency established in the community framework, in that it seeks to cover the following specific needs:

Starting from the need to prioritize the implementation of measures directed at improving the efficiency of preventive detection and intervention, reporting risk factors related to drug use to contribute to early intervention programs, and guarantee training for professionals who are in contact with potential drug users, especially young ones.

The E-NEEDD Project meets several of the proposed objectives of the Strategy to Combat Drugs 2005/2012. In line with this strategy document, it is considered essential to successfully prevent at school level, to research and train teachers and professionals working in education. E-NEEDD aims to develop applied solutions and training in the field of drug prevention 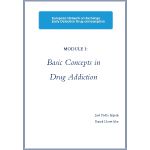